Posted by Dhirendra Bhatnagar on May, 02, 2010 ,  Category: Cancer Workshop 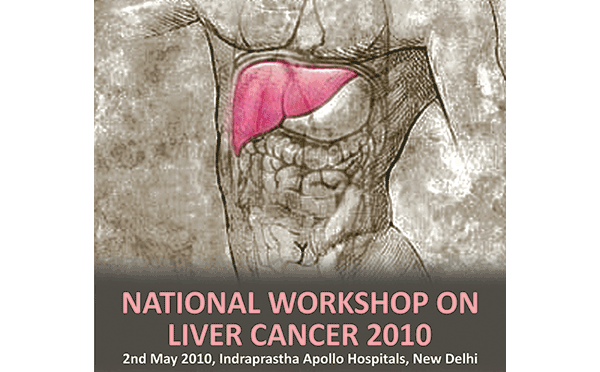 Cancer is projected to become the leading cause of death by the end of this year, and the cases of cancer have doubled between 1975 to 2000 and will double again by 2020 and will nearly triple by 2030.

Primary tumors of the liver represent the sixth most common malignancy worldwide and the third most common cause of death from cancer. Globally it accounts for approx. 626,000 cases annually, with male to female ratio of 2.5:1. This cancer is much more common in this Southeast Asia and sub-Saharan region than in the west. This high incidence relates to its common association with cirrhosis from either alcohol or hepatitis B and C.

The average age at diagnosis of liver cancer is 64 and more than 90% of people diagnosed with liver cancer are older than 45 years of age. Liver cancer in adults has a poor outlook because of this late diagnosis. By the time someone has symptoms and goes to their doctor, the disease is very often in the advanced stages. Only about 1 out of 10 people (10%) are diagnosed in the early stages of this disease when surgery can infact help.

5 year survival rate for people with liver and intrahepatic cancer is a dismal 3 to 5% in most cancer registries. In general these tumors have a poor prognosis, compounded by the background liver disease in most of the patients.
Liver is the most common site of metastases for colorectal cancers and it is shown by the statistics that 15 to 20% of patients with CRC present with synchronous liver metastasis. The incidence of clinically significant metastatic carcinoma to the liver is 20 times more common than primary carcinoma of the liver. For all patients with stage IV disease overall 5-year survival is 8.1%.

Continued improvement in the management of liver cancers is expected. Better imaging studies have become available to screen for hepatic malignancies; liver transplantation has been increasingly applied and its role now is better defined in this group of patients; newer therapies such as 90Y-microsphees and systemic sorafenib have become available.

Cancers arising from the liver – Hepatocellular cancers and ones arising in other organs like large intestine, breast, rectum, stomach, lung, esophagus, uterus are problematic not only for the patients but for their treating specialists as well. The mainstay of treatment most of the time is Locoregional therapies – like Radiofrequency Ablation, Hepatic Artery Infusion of Radioparticles – SIRSPHERE, TACE, Targeted treatments with oral drugs ‘Sorafenib’ (NEXAVAR/SORANIB) are newer treatments which have promise.

Radiofrequency ablation (RFA) involves introducing sophisticated needles inside tumors in the liver which are then imparted electrical energy. The electric energy converts into heat energy causing death of tumor cells. All this can be done on awake patients without open surgery under the guidance of ultrasound or CT Scan imaging and obviously has minimal side effects, which is beneficial in very sick patients. Hepatic Artery infusion of Radio particles is a hi-tech technique where nanotechnology produced Radio particles are selectively introduced through a fine catheter into the tumor. They cause selective destruction of tumor. If requires highly skilled infrastructure and radioactive materials (SIRSPHERE/THERASPHERE) currently imported from Canada and Australia at high prices.
This program is intended to raise awareness about these hopeless cases in sufferers and treating physicians alike and join together to transfer technology so that some difference could be made.

The Hon’ble health minister will dedicate to the nation a Liver Cancer Helpline 9212068782 and inaugurate this highly technological meeting where live demonstration will be conducted to an interested audience drawn from various parts of the country.

Future advancements should focus on better surveillance screening of the patients, improved regional therapies and systemic therapies and control of etiological factors as alcohol and hepatits B and C.