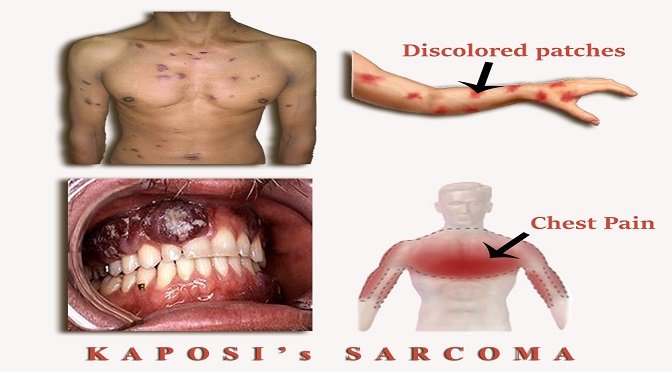 Kaposi’s sarcoma is a rare type of cancer caused by a virus called Human Herpesvirus-8 (HHV-8), also known as the Kaposi’s sarcoma- Associated Herpes virus (KSHV). This cancer is mostly seen in people with an advanced HIV infection, people with a weakened immune system and for another reason, such as after having an organ transplant. Dr. Sameer Kaul , Sr Consultant Surgical Oncology & Robotics , Apollo Cancer Institue, New Delhi, discusses the different types of Kaposi’s sarcoma , Symptoms, Diagnosis ,treatment ,and risk factors at length.

Weakened Immune System
A weakened immune system allows the HHV-8 virus to multiply to high levels in the blood, increasing the chance of it causing Kaposi’s sarcoma. The virus appears to alter the genetic instruction that control cell growth. It affects the endothelial cells, which line the inner surface of blood vessels and lymphatic vessels.

Endemic or African Kaposi’s sarcoma
This is common in parts of African where the HHV-8 infection is widespread. In many cases, it’s caused by an undiagnosed HIV Infection, and HIV Medication is the most effective treatment.

Classic Kaposi’s sarcoma
This is very rare and mainly affects the skin on the lower legs and feet.

Most Common initial Symptoms are Small, discoloured patches on skin or in the mouth.

Uncomfortable swelling in the arms or legs (Lymphedema).

Look at hard palate and gums.

Look at dorsal and plantar aspect of feet.

Look for woody lymphedema of legs.

Main method of diagnosing is biopsy. A sample of affected tissue is taken and checked under a microscope. The procedure is performed under local anaesthesia.

Blood test is used to see if the cancer has spread.

Upper endoscopy can be done to examine the esophagus, stomach and the small intestine, A long, thin, flexible tube with a light and camera at one end (an endoscope) is passed through the patient’s mouth .If doctor suspects Kaposi’s sarcoma a biopsy of the affected tissue can be done to confirm the disease.

Colonoscopy can be done to examine the walls of rectum and colon, a thin tube (colonoscope) is passed through the patient’s rectum and advanced into colon to examine . If any abnormalities found during the colonoscopy, rectum or colon can be biopsied during.

This disease is one of the main types of cancer to affect people with HIV. It can progress very quickly if not treated. It can usually be treated very effectively by taking HIV medication known as combination antiretroviral therapy (ART).